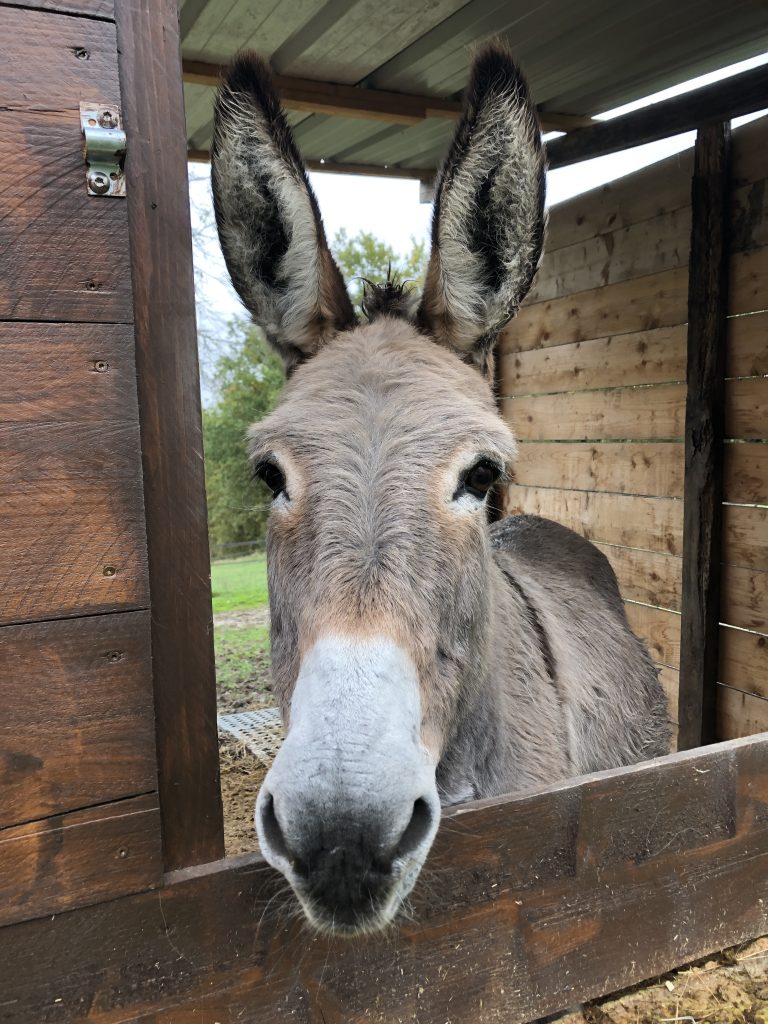 In December 2019 me, my baby Cracker, friend Holly and her baby Caspar were a sorry state indeed. Having been bred for going on the one way lorry to Italy along with many others, we were saved from that fate by another sanctuary. Thankfully we were spotted by a couple of ladies, Linda Foster-Smith and Helga Habefellner, who had come to adopt a couple of piggies. The place we were in didn’t have enough food for us all and there was no shelter. We were all very hungry, we had also had to stand in torrential rain for weeks.

The ladies told HeeHaws all about us and the rescue mission began.

We arrived at HeeHaws in January, cold, sore and hungry. but what we had arrived to felt like heaven. A shelter, (necessary for us donkeys as we aren’t waterproof), a straw bed, containers full of hay, fresh water and to top it all breakfast lunch and dinner. Woohoo.

We had a huge amount of worms in our bellies which we were treated for and we soon started to feel much better.

A few months on and Cracker and Caspar were given a paddock to themselves, giving Holly and I a rest. Although Holly and I got on quite well, we weren’t really friends, so after she had her new foal, the very energetic Willow, I was quite relieved to be put in a new paddock with Rigalo. I mean who wouldn’t, gosh he’s handsome, I mean really handsome, though please don’t tell him I said so, his head is big enough already. I was so taken with him I went all silly, but thinking on my hooves, I let him think he was boss and move me around a bit for the first few days, then he would be so in love with me we would be a forever couple. It worked and here I am, happy as can be and staying here forever. its been said that it’s because I have a breathing problem, but I just know it’s because Rigalo won’t let me go.

Laying in the sun

Help us to save other donkeys!