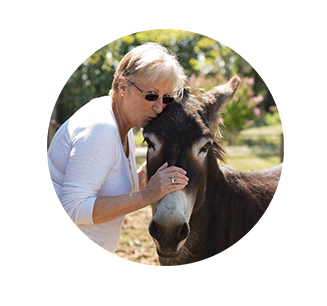 Hello, I’m Linda and I am the Treasurer for HeeHaws.

I have an extensive background in banking and have also been a Treasurer for an animal charity back in the UK, so am sure of my abilities to do right by the charity. I was retired before I became Treasurer for HeeHaws, but my bookmaking skills are still hot to trot! Ohhhh, yes!

I have been with HeeHaws before it became official in February 2018 and am hugely proud to be able to say that. I believe in the charity and the work it has done and shall continue to do.

I moved to France in 2007 and can confidently say that I have a good understanding of the language, which helps on many levels. Tre´s bon, n’est ce pas?

My love of animals started at a young age, but wasn’t fortunate enough to have my own pet until I was 26…since then I have never looked back, or been without a pet. I currently have four dogs, two cats and a husband!

I have done courses on animal behaviour, which gives me a certain je ne sais quoi when dealing with animals. I hope to be able to use these skills, as well as new ones, with the donkeys we rescue.

My love and passion for donkeys is relatively new, but believe me when I tell you that they have stolen my heart in the most delightful way possible.

I believe passionately in what we are doing at HeeHaws and am absolutely committed to doing everything I can to make it a HeeHawing success.

Please support HeeHaws in any way you can.