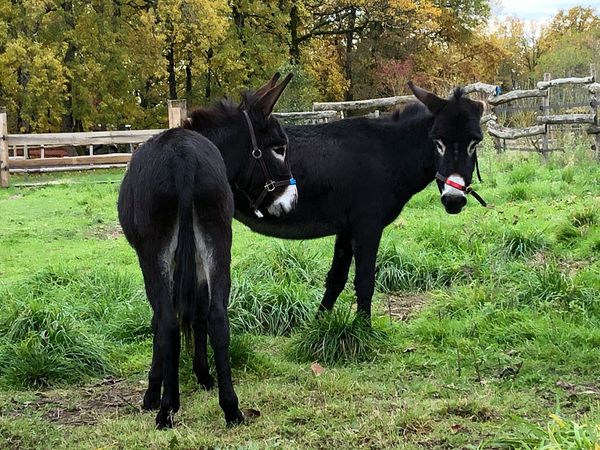 At the beginning of November 2019 we were asked to go to see two donkeys in a field an hour away. Nothing prepared us for what we were about to see and hear.

Two lovely ladies who lived opposite the field discovered that not only had the owner died but 3 of his 5 donkeys had too, in the field!

The two remaining donkeys, a young male and female, were now neglected and very skinny and the male couldn’t walk. They called the vet (who treated him for many abscesses) and then they called us. They also found out the the field had been sold and the new owner was going to have them euthanised. Obviously we said we would take them but the male would need to be castrated immediately.

Once again our wonderful supporters came to our rescue, raising the funds for the castration, microchips and vaccinations and off they went to the vet where they would stay for a week. By now we had christened them Horace and Hettie and we were looking forward to their arrival here.

Meanwhile, a client of the vet, an experienced owner and breeder of Baudet de Poitou had seen them, fallen in love and wanted to adopt them.

A week later they arrived here, underweight obviously and a little bit scared, but that soon changed once they realised they were safe. We cared for them over the next two months, getting them used to human contact and doing the basic training they needed. Horace also started the long road of recovery as his hooves were misshapen and had suffered terribly from all the abscesses and neglect. Then in January 2020, having checked out their new home and owners (something we do for ALL the donkeys that are re homed) they left for their forever home with Helga and Paul and all their lovely donkeys. Renamed Felix and Fanny they soon settled in with their new friends (though Felix thinks he is the boss) and, when Fanny started to gain weight, it became obvious that she was already pregnant.

August 2020, Fanny gave birth to little Kiwi, tiny but healthy and doted on by his mum and his humans!

Many thanks to Helga and Paul for giving them such patience and love and to Magalie Taine and her sister for caring about them and, more to the point, doing something about it. Without your help three lives would have been lost.